E-Cigarettes Exploding: E-cigs have been marketed as a safe alternative to cigarette smoking, but recently the devices have been reported to explode, causing fires and serious burn injuries. They also have been found to produce formaldehyde and other dangers toxins such as diacetyl.

July 3, 2016 – Rachel Berven pushed the activation button & claimed the e-cigarette exploded, ripping a hole in her mouth and spewing battery acid across her body, according to the Wall Street Journal.

June 10, 2016 – A man from Tustin, CA., spent a week in the hospital after an electronic cigarette exploded in his mouth, according to CBS News.

June 8, 2016 – A 22-year-old man from Muskogee, Olka., has filed a lawsuit against a local vape shop after an electronic cigarette exploded in his mouth, according to FOX23 News.

May 10, 2016 – California resident Joseph Cavins filed a lawsuit after he lost an eye while vaping at home, according to ABC News. 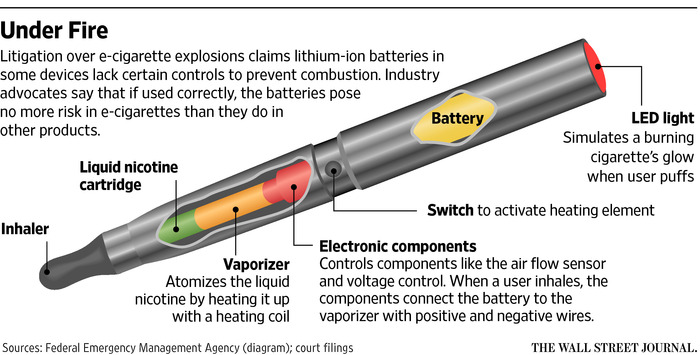 Since hitting the U.S. market in 2007, e-cigarettes, which heat liquid nicotine and other ingredients into an inhalable vapor, have been touted as a safer alternative to traditional cigarettes and a path to quitting smoking. But some lawyers and consumers say the $3.5 billion industry isn’t doing enough to address a potential hazard: cheaply made lithium-ion batteries in the products that can unexpectedly explode (SARA RANDAZZO, Wall Street Journal).

According to the Wall Street Journal, Experts hired by plaintiffs in e-cigarette lawsuits say the lithium-ion batteries can lack controls to prevent either overcharging or discharging to a voltage that is too low, which can cause combustion. The batteries also can lack a hollow center core that would allow gas to escape slowly.